How To Do A Full Body Workout In Your Cell

An important element of any educational psychology class is learning to create lesson plans. My educational psychology class in my prison class was no different. In addition to a longer unit plan, which I will discuss in a later blog entry, students were required to create and present a 10-minute lesson to their classmates. They also had the opportunity to work in pairs.

This assignment was a perfect example of how context shapes content.

For the most part the student’s lesson plans were marked by some aspect of their incarceration, even though the assignment didn’t require them to do so. Kirby demonstrated how to be safe when welding, his Minncor job, Matthew discussed how to get grants for correspondence college courses while incarcerated while LaVon and Ronald teamed up to demonstrate Texas Hold ’em, a common pastime in the cellblock.

Of particular note was Leon, who ingeniously had created an entire workout program that can be completed entirely in one’s cell. The class was completely captivated, especially as he demonstrated his pushups, biceps bulging triumphantly.

Perhaps most poignantly, Luis gave a lesson on how to be a better parent even when one is incarcerated. Luis has contacted the Big Brother program to secure a mentor for his 10-year-old son. In fact, his gesture was featured in a recent article in our local newspaper.

Yet, the image that lingers most for me is Ronnie’s lesson. He decided to teach origami.

Ronnie passed out colored origami paper, and patiently explained how to make a paper bird. Bent in concentration, brows sweating, the blue clad heavily tattooed tough guys fussed over their birds, becoming exasperated when their wings didn’t lie just so.

“I really want mine to look like a bird, Ronnie. Can you help me?”  “Can I have some extra paper?” “Can we do this during the break?” The fact that Ronnie’s lesson had nothing at all to do with any aspect of incarceration made us all almost giddy.

As his lesson ended Ronnie noticed the pathetic shape of my bird.  “No offense but that’s awful,” he laughed. “Here, I’ll make you one. It’s the least I can do for you. Maybe, he says, it’s the only thing I can do for you.”

He deftly folds a piece of colored paper into a bird, and I thank him. Right then, the guard comes, and the class ends unceremoniously as it always does, but this time 24 inmates clutch colored birds on their way back to their cells.

Blog Except from the book Words No Bars Can Hold 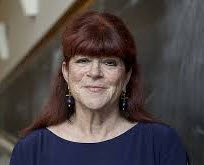 Deborah Appleman lives in Minnesota and is the Hollis L. Caswell Professor of Educational Studies and director of the summer writing program at Carleton College. Since 2007, she has taught language, literature, and creative writing courses at a high-security prison for men in the upper Midwest.
All Posts »
PrevPreviousFist Bump Through the Bars
NextTony and the Blue BookNext